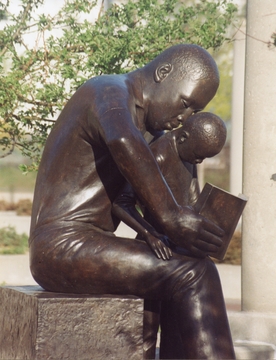 The 1990s heralded many exciting events and accomplishments on the Roxbury Community College campus.  It was a period of growth in academic programming, student enrollment, and community recognition. 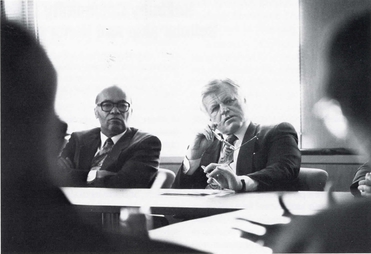 On May 11, 1992, Senator Ted Kennedy visited RCC’s campus for an open discussion with students, faculty, and staff. According to the school newspaper, “this meeting was a positive step allowing inner-city residents an opportunity to speak on issues affecting their lives, their children and their community.”

Click here to read the story on Senator Kennedy’s visit, in the May 1992 edition of The Collegiate. 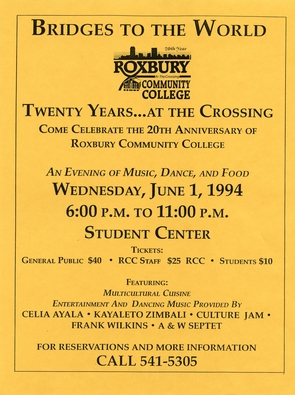 Flier for the 20th anniversary celebration “20 Years at the Crossing” held on June 1, 1994

Many exciting developments occurred on RCC’s campus leading up to its 20th anniversary. Despite earlier funding challenges, Roxbury Community College fought for its role in the greater Roxbury community. Multiple new programs, joint projects, and visitors helped make the early 1990s an exciting time to be a part of RCC.

On June 1, 1994, Roxbury Community College proudly celebrated its 20th anniversary. The festivities included music and dancing representative of RCC’s varied cultures and guest speakers such as US Representative Joseph Kennedy. 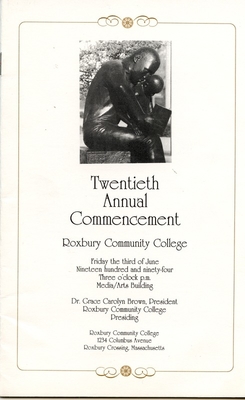 A testament to the sense of community felt at RCC, several alumni were quoted in the 1994 annual report. Elizabeth Golden, RCC ’94, noted:

“You’re not just a number but can relate with the teachers on an individual basis….”

In addition to the academic achievements accomplished in the first twenty years, Roxbury Community College also made strides in athletics. In 1995, The Reggie Lewis Track and Athletic Center opened next to the RCC campus. 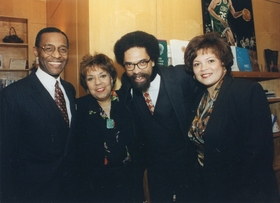 The goal of these lectures was to “improve the understanding about significant social and economic issues which are of fundamental importance, not just to people of color, but to the functioning of the principles of American democracy.” – 1997 RCC annual report 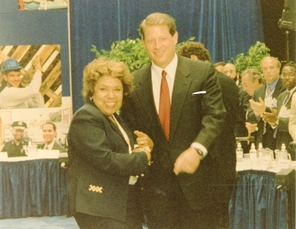 On Tuesday, August 22, 1997, more than 1500 people attended the Empowerment Zone Conference to hear from Vice President Al Gore and other dignitaries on the subjects of urban renewal, economic growth, small business support, and job training. 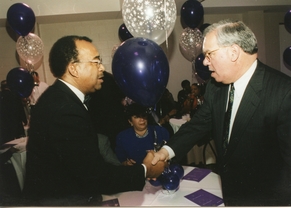 On Saturday, December 12, 1998, Roxbury Community College held an extensive celebration for its 25th anniversary. This event honored all of those people who worked so hard during the formative years of the college, demonstrating a commitment to education and to the greater Roxbury community. 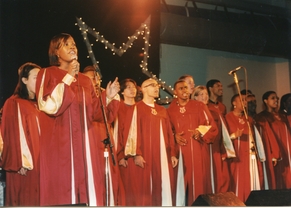