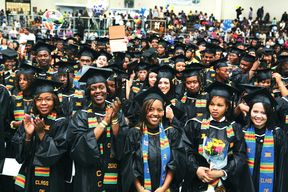 RCC demonstrated a great deal of growth during the 1990s and provided excellent opportunities for its community members.

The college continued this momentum in 2000 with a two-day conference entitled Future Search, Vision 2005. Participants, including students, staff, faculty, administrators, alumni, and community leaders, joined together to discuss how past events in RCC’s history and the community might impact the future plans of the college. Those in attendance came up with a “blueprint” for the future of RCC.

After supporting much of this success, Dr. Grace Carolyn Brown resigned as the RCC president in 2001. 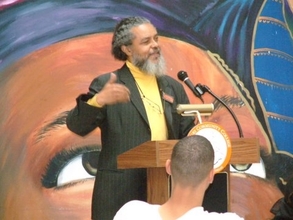 In the fall of 2005, RCC campus welcomed Massachusetts State Representative Byron Rushing to teach the much anticipated “Roxbury History” course. The course focused on the significant community history, people, places, and historic sites of this Boston neighborhood.

In the photo to the right, Representative Rushing is seen standing in front of one of many art pieces found around RCC’s campus. This particular mural was funded by the class of 1997. 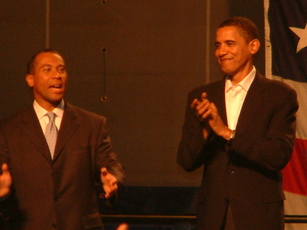 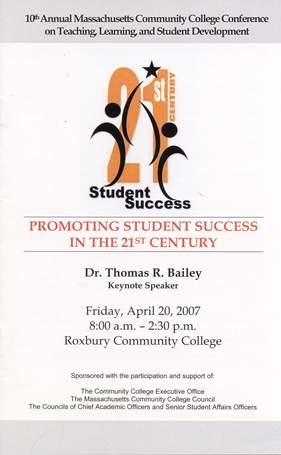 With over 500 people in attendance, participants engaged in conversations about student learning and preparing students for success in the 21st century.  The keynote speaker was Dr. Thomas Bailey, director of the Community College Research Center at Columbia University. 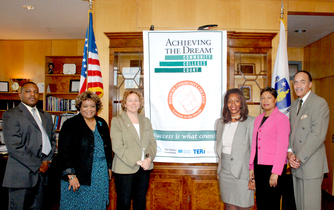 RCC received recognition as an Achieving the Dream College in June 2007. This honor came with a grant to implement programming to support student success at RCC. One of only four Massachusetts community colleges to receive this title, RCC joined a network of over 80 colleges participating in the Achieving the Dream program. 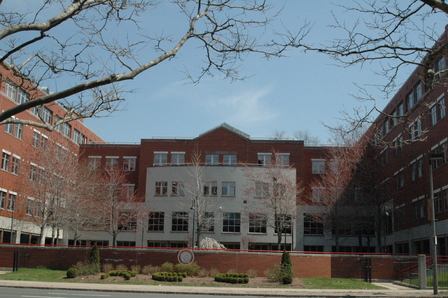