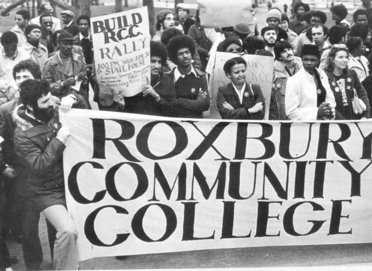 Even after receiving approval for a permanent site, located in the Southwest Corridor, delays and power struggles halted the progress of building a college in Roxbury. 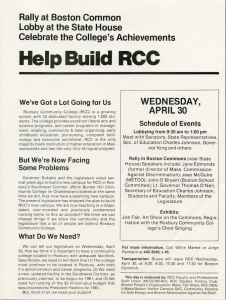 At the time of the proposed merger, RCC had approximately 1,000 students and a dedicated staff and faculty. The merger idea was strongly contested by the community, which argued that the predominantly black neighborhood and its residents would lose representation and opportunity in higher education. The proposal resulted in a protest at the Massachusetts State House, including a teach-in.

The rally organizers stressed that “RCC is the only majority black institution of higher education in Massachusetts and has the only fully bilingual program.” The desire for community members to have access to a quality education within their neighborhood, an issue that had been a driving force of RCC since its inception, was always at the forefront of the mission.

The controversial plan played out in the media as well, with local papers documenting both sides of the argument. In the end, the merger of RCC and Bunker Hill Community College did not take place, and plans to build in the Southwest Corridor continued. 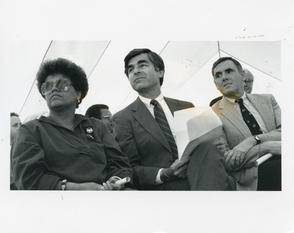 In the interim, the school made one more move to its last temporary location on Huntington Avenue during the summer of 1982.

In December 1982, Dr. Brunetta Wolfman was elected as RCC’s first female president and was inaugurated on April 16, 1983. 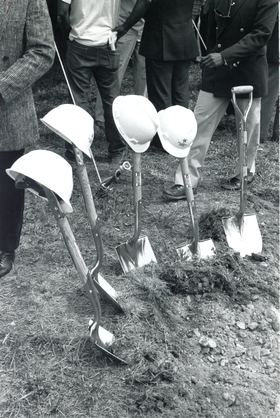 Shovels and hard hats at the groundbreaking ceremony for the permanent site of Roxbury Community College, August 27, 1985

Finally, the long-awaited groundbreaking ceremony for RCC’s campus occurred on August 27, 1985. Many of Boston’s leaders were in attendance, including Boston Mayor Ray Flynn and Governor Michael Dukakis. The day’s celebration included speeches, music, and the ceremonial first shovel to mark the start of construction.

Click here to view more images of the groundbreaking ceremony.

Click here to read the program from the ceremony. 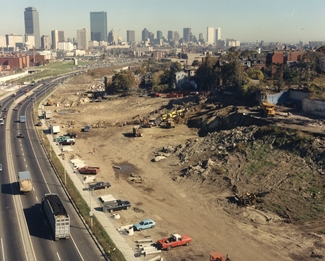 With a projected cost of $24.7 million, construction began at the Southwest Corridor location. The construction took approximately three years, finally giving Roxbury Community College a permanent home and a prominent place in the community it intended to serve.

Click here to view more images of the construction of RCC. 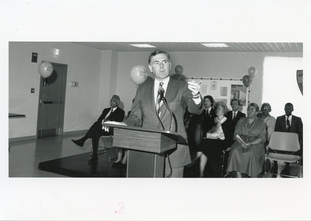 On April 11, 1988, Roxbury Community College celebrated its long-awaited opening. So many people anticipated this day, and the celebration did not disappoint. Boston Mayor Ray Flynn spoke during the festivities. 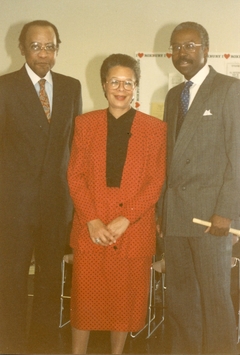 Though she officially resigned on December 16, 1987, Dr. Wolfman delayed her departure in order to oversee a smooth transition to the new site.

The new construction totaled $40 million, with a 12.3 acre campus, and comprised 4 buildings, 55 classrooms, a library, and a greenhouse.

“The campus has become a symbol of better things to come for an old neighborhood in the center of Boston long identified with intractable poverty, crime and urban blight,” wrote The New York Times in 1988.

RCC faculty and staff at the Massachusetts Community College Rally, 1989

Despite overcoming challenges and setbacks along the way to getting a place of its own, the RCC community had to fight again towards the end of the decade. Community college education was under threat state-wide.

In March of 1989, members from every Massachusetts community college congregated at the State House to have their voices heard. Students, faculty, and administrators met with government representatives. Speakers included Governor Michael Dukakis, Representative Byron Rushing, and other strong supporters of affordable avenues to higher education. Remarks were also given by students and faculty. 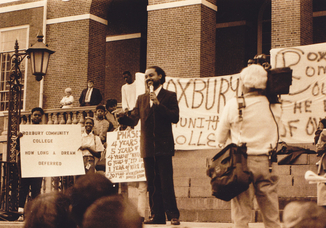 Click here to see more images of the rally.