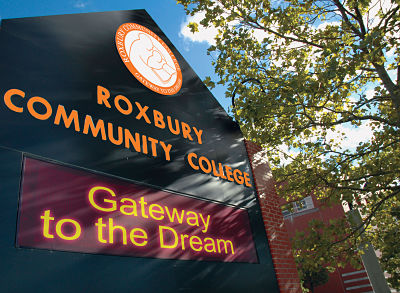 Years of dreaming and planning came to life in 1973, when Roxbury Community College opened its doors on Blue Hill Avenue in the Grove Hall area of Roxbury. Despite less than perfect surroundings – its location was a former car dealership – Roxbury Community College’s dedicated faculty, staff, and administration served the educational needs of four hundred students. The College’s mission then, as it is now, was to provide higher education to those Boston residents who found most other avenues to higher education closed.

In 1974, growth was the impetus to a move to 424 Dudley Street, a former nursing home. This move permitted the expansion and strengthening of academic programs and student services. The College continued to grow, which precipitated another move in 1982 to the former site of Boston State College on Huntington Avenue. As the College continued to shift its service base to meet an expanding enrollment, the goal to establish a permanent home for Roxbury Community College in the heart of communities it served remained strong.

With much anticipation, Roxbury Community College built its new home as the cornerstone of the Southwest Corridor in the Spring of 1988. This fifteen-acre campus includes the Media Arts Building, Academic Building, Student Center, and the Reggie Lewis Track and Athletic Center.

A global village, Roxbury Community College’s multicultural and ethnically diverse student population sets it apart from other community colleges in the Commonwealth. Although most students are from Boston and surrounding communities, many come from all corners of the world, including North America, Central America, South America, Africa, Asia, the Middle East, Europe, and the Caribbean.